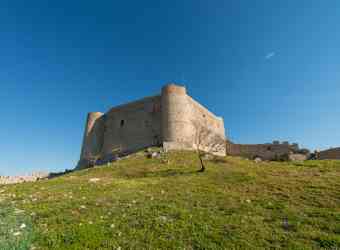 In the 13thth century, Geoffrey I of Villehardouin (Geoffroi I de Villehardouin), was appointed by the Pope Innocent III as one of the “Princes of Achaea” in Morea. It was he who decided and completed the construction of the Castle at Chlemoutsi, in order to control the region. In fact, in order to complete it he confiscated the incomes of the Latin clergy, provoking the wrath of the Pope who excommunicated him. The issue was resolved with the completion of the castle when Geoffrey received forgiveness for the "hubris", managing to convince the Pope for its necessity. The “Castel Tornese”, as it is also known, was one of the most important castles of the Principality of Achaea and one of the most impressive castles of the Peloponnese. Chlemoutsi, located in the village of Kastro, built on the top of a hill, dominated the valley of Elis region and protected Andravida, the capital of the Principality, as well as the important port of Glarentza.