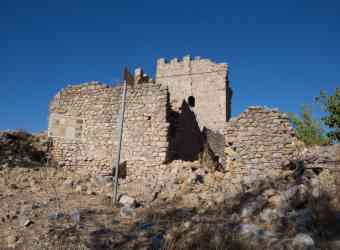 The Castle of Zarnata or, equally known, the castle of Koumoundourakis, is located in the northwest frontier of Mani, upon a hill near the Plain of Avia. The polygonal walls in the foundations of the castle testify the existence of an ancient citadel. The castle, built in the 17th century, appears to have been built on the ruins of a preexisting castle of uncertain origin. Some believe that the construction was made by the Franks, others attribute it to the Venetians and others to the Turks, with the latter being the dominant version as several sources indicate the Vizier Ahmet-Kioupourli as the founder of the Tower. The siege of Morosini in 1685 passed the control of the castle to the Venetians until 1715, when it was occupied again from the Turks, while on 1776 passed to the control of Maniates. During the Greek War of Independence it played some role while at the Second World War functioned as a fortress; finally, during Civil War it was a shelter. There are currently, inside the castle, some rescued parts of the medieval wall, as well as frescoes of the 15th century. There is also a tower with three floors and a residence with five floors.