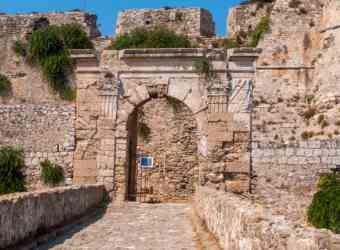 Methoni was known in the antiquity as Pedasus and later as Mothoni. During the imperial roman years the city remained autonomous, while during the Byzantine years it was an important commercial harbour. In the 11th century the city became the base of operations for pirates and was destroyed by the Venetians in 1125. After the fall of the Byzantine Empire it gets occupied by the Franks and next year from the Venetians. In the beginning of the first Venetian occupation the conquerors signed a treaty that ensured their sovereignty. The Venetians built and fortified the castle, which resulted to the development of Methoni into an important trade centre with great prosperity. In 1500, Methoni is occupied by the Ottomans, under whose sovereignty remains until 1685; that year the Venetians, under the commands of Morosini lay siege to the city. The second Venetian occupation lasted up to 1715; the Turks occupy it once again. In 1825, the Egyptian forces of Ibrahim Pasha settled inside the castle; they surrendered to the French general Maison in 1825. Since then the castle was depopulated.